Industrial Revolution
Dramatic innovations in manufacturing, mining, transportation, and communications = changes in society and commerce. Industrializing countries = Britain, Western Europe, then US. Massive increases in production and productivity. Characterized chiefly by the replacement of hand tools with power-driven machines. Movement from "cottage"/home industry to large, centralized manufacturing establishments. Increased gap between rich and poor.
agricultural revolution
Potatoe crops produced 2-3x more food per acre. Rich farmers "enclosed" (fenced) their lands to rotate crops and try new farming methods to create more output. Less common land for "shared" cultivation meant increase in "landless laborers" (rural farmers) who gave up farming to work in factories.
mass production
The manufacture of many identical products by the division of labor into many small repetitive tasks. This method was introduced into the manufacture of pottery by Josiah Wedgwood and into the spinning of cotton thread by Richard Arkwright. 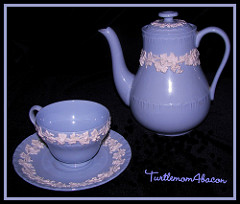 Josiah Wedgwood
Started pottery business in 1759. Invented pyrometer to measure high temps in kilns. Most important contribution = produced ordinary porcelain cheaply by means of division of labor. First to use steam engine in factory (mix clay and grind flint). Able to create uniform pottery pieces inexpensively that could be sold throughout Britain and Europe (leveraging new methods of transportation).
division of labor
Manufacturing technique that breaks down a craft into many simple and repetitive tasks that can be performed by unskilled workers. Pioneered in the pottery works of Josiah Wedgwood and in other eighteenth-century factories, increasing productivity.
mechanization
The use of machines to do work previously done by hand. Cotton industry benefitted most; was previously spun/woven by hand. Spinning jenny = twisted cotton fibers into thread.
Richard Arkwright
English inventor and entrepreneur who became the wealthiest and most successful textile manufacturer of the early Industrial Revolution. He invented the water frame, a machine that, with minimal human supervision, could spin several threads at once. (604) 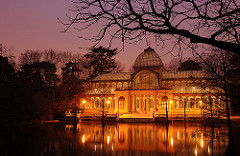 Crystal Palace
In 1851 Great Exposition, held in the Crystal Palace, reflected the growth of industry and population in Britain and confirmed that Britain was the "workshop of the world." The Crystal Palace, an architectural masterpiece made entirely of glass and iron, both of which were cheap and abundant. Companies and countries displayed their products and juries awarded prizes in the strikingly modern Crystal Palace.
steam engine
First machine to transform fossil fuel into mechanical energy. Substitute for human and animal power, wind and water power. Steam engine set the industrial revolution apart from all other periods of growth/innovation. Newcomen invented first machine, then James Watt innovated it to make it more effective.
James Watt
Scottish engineer and inventor whose improvements in the steam engine led to its wide use in industry (1736-1819)
electric telegraph
A device for rapid, long-distance transmission of information over an electric wire. It was introduced in England and North America in the 1830s and 1840s and replaced telegraph systems that utilized visual signals such as semaphores. (609)
business cycles
The industrial revolution led to increased wages and decreased prices. However, improvement was not steady. Natural business cycles (supply and demand; growth and contraction) caused severe problems when demand or supply was down. Potato crops failed in Ireland causing mass starvation (1/4 of population died) and emigration to England/US (1847-48). Few workers had savings and there were no gov't backed unemployment services.
laissez faire
Adam Smith (1723-1790; Scottish economist) in his book, The Wealth of Nations, argued that it is best to allow individuals to seek personal gain with little gov't interference in the economy (free market economy); allowing this unfettered personal acquisition of wealth would benefit the general welfare. Gov't should allow duty-free trade with foreign countries. Opposite concept of "mercantilism" which regulated trade (taxes; duties).
mercantilism
The concept that governments should regulate trade to in order to maximize their hoard of precious metals. Nations sought to increase their wealth and power by obtaining large amounts of gold and silver and by selling more goods than they bought (pre dates and opposite of laissez faire).
positivism
A philosophy developed by the French count of Saint-Simon. Positivists believed that social and economic problems could be solved by the application of the scientific method, leading to continuous progress. Recommended that the poor be guided by scientists and artists, and form working communities under protection of benevolent leaders. Popular in France and Latin America.
utopian socialism
Charles Fourier (1768-1837) loathed capitalism and suggested that ideal society = 1600 workers live in dormitories and work in factories or work the land together. Would receive music, wine, pastries to soften labor/living hardship.
WE WILL WRITE A CUSTOM ESSAY SAMPLE
ON ANY TOPIC
SPECIFICALLY FOR YOU FOR ONLY $13.90/page
Order now
Related Essays
AP World History Ch 31 WBZ

NATO North Atlantic Treaty Organization; an alliance made to defend one another…

What were 3 causes of World War I? 1. rise of nationalism…

AP World: History of the World in Six Glasses

When did anatomically modern humans first emerge? 150,000 years ago When did…

When did agriculture start? about 12,000 years ago What stage was the…