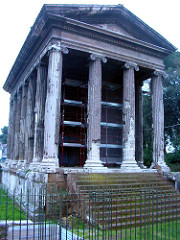 Temple of Fortuna Virilis (Temple of Portunas)
75 BCE. Volcanic ash used in concrete. Roman, Greek, and Etruscan elements. 1 Cella with engaged columns - Ionic Order - Facade orientation, you are suppose to look at it from the front. 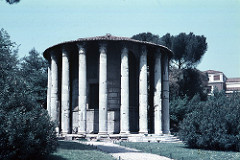 Temple of Vesta
Italy - Early First Century BCE, Frieze around the top, on entrace, and a round cella. 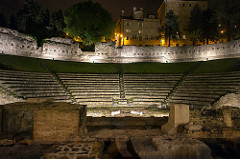 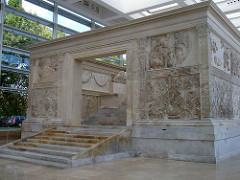 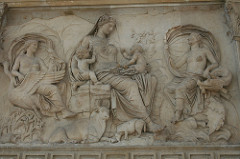 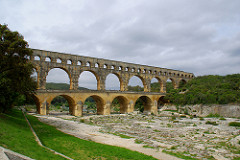 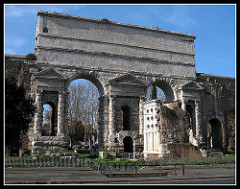 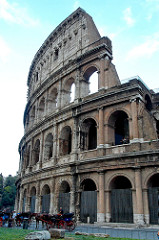 Flavian Amiptheater AKA Colosseum
Begun in 70CE, completed by Titus (Ves's son) in 80CE. 160ft tall, 617ft wide and holds aprox 50,000. 80 columns all three orders. Named by Vespasian, who's family name was Flavian. Built over a lake, built as a political statement to reject Nero. Made out of concrete and faced with other stone. 2nd fliir has groin vaults and barrel vaults. - Possible Essay Question 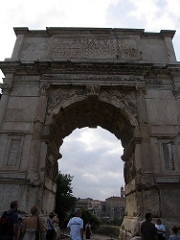 Arch of Titus
81CE, built after military campaign through Jerusalem. Depicts the spoils of the Jews on Frieze. Built by Dumision (other son of Vesp) to honor Titus.
Forum of Trajan
Architect: Apollodorus of Damascus - Dedicated in 112CE. Part of the Quirinal Hill was removed, was a massive building for government.

Column of Trajan
Dedicated in 112CE. Located within the forum of Trajan. 128ft high, same height the hill used to be they had to cut out. Trajan and his wife are buried there. 625ft of Frieze showing the prolonged campaign and defeat of the Deaians. NOTE: Trajan extended the Roman empire to it's farthest boundary. 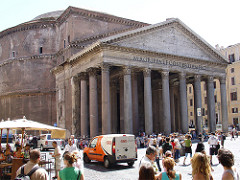 Pantheon
Hadrian commissioned it. 142ft high, thickness of the base is 25ft. White and colored marble, different mixtures of concrete used. Dome was the largest in the oldest for 1,000 yrs. ITS THE ONE WITH THE GIANT WHOLE IN THE CEILING and no other windows. - Possible Essay Question 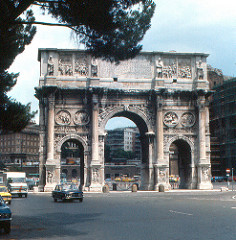