Order now
Jesus—perhaps the most discoursed name in history. He has transformed and influenced many lives including mine. To some people, He was a prophet. To others He is a mere legend. To me, he is a father and a friend, but most of all, He is my Lord and Savior through justification, sanctification, and redemption. First of all, Jesus is my Savior through justification. Justification by faith is being attributed by God as righteous, even though we have sinned, and are therefore relieved from guilt and punishment. “But to him that worketh not, but believeth on him that justifieth the ungodly, his faith is counted for righteousness.” –Romans 4:5 The two principles of justification are as follows: the One who has been wronged pronounces the circumstances of justification, and man’s justification is established on the virtues of Another. God must therefore determine the proceeding of justification, and man cannot stand in the presence of God nor in heaven without Jesus Christ. One elucidation of justification in the Bible is found in Philemon. When Onesimus, a slave, stole from his master, Philemon, and ran away, Onesimus was placed in prison and charged with crimes that were punishable by death. Perhaps in prison, Onesimus met Paul. As a result of their meeting, Onesimus accepted Jesus as his Savior. Paul then wrote back to Philemon asking him to accept Onesimus as a brother in Christ, and to place whatever wrong Onesimus had done on Paul’s account. 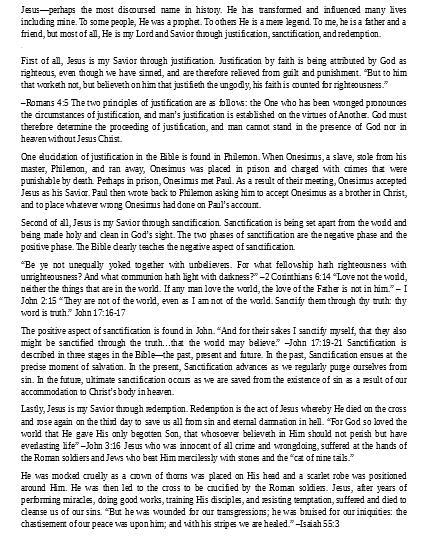 Second of all, Jesus is my Savior through sanctification. Sanctification is being set apart from the world and being made holy and clean in God’s sight. The two phases of sanctification are the negative phase and the positive phase. The Bible clearly teaches the negative aspect of sanctification. “Be ye not unequally yoked together with unbelievers. For what fellowship hath righteousness with unrighteousness? And what communion hath light with darkness?” –2 Corinthians 6:14 “Love not the world, neither the things that are in the world. If any man love the world, the love of the Father is not in him.” – I John 2:15 “They are not of the world, even as I am not of the world. Sanctify them through thy truth: thy word is truth.” John 17:16-17 The positive aspect of sanctification is found in John. “And for their sakes I sanctify myself, that they also might be sanctified through the truth…that the world may believe.” –John 17:19-21 Sanctification is described in three stages in the Bible—the past, present and future. In the past, Sanctification ensues at the precise moment of salvation. In the present, Sanctification advances as we regularly purge ourselves from sin. In the future, ultimate sanctification occurs as we are saved from the existence of sin as a result of our accommodation to Christ’s body in heaven. Lastly, Jesus is my Savior through redemption. Redemption is the act of Jesus whereby He died on the cross and rose again on the third day to save us all from sin and eternal damnation in hell. “For God so loved the world that He gave His only begotten Son, that whosoever believeth in Him should not perish but have everlasting life” –John 3:16 Jesus who was innocent of all crime and wrongdoing, suffered at the hands of the Roman soldiers and Jews who beat Him mercilessly with stones and the “cat of nine tails.” He was mocked cruelly as a crown of thorns was placed on His head and a scarlet robe was positioned around Him. He was then led to the cross to be crucified by the Roman soldiers. Jesus, after years of performing miracles, doing good works, training His disciples, and resisting temptation, suffered and died to cleanse us of our sins. “But he was wounded for our transgressions; he was bruised for our iniquities: the chastisement of our peace was upon him; and with his stripes we are healed.” –Isaiah 55:3 Jesus is our only feasible Savior. No other could justify, sanctify, and redeem us; for, he was the perfect lamb. He was holy and blameless in the sight of God. Only through his stripes could we be healed. “All we like sheep have gone astray; we have turned every one to his own way; and the LORD hath laid on him the iniquity of us all.” –Isaiah 53:6 Yes, Jesus is a father, a friend, a provider, and a comforter. But most of all, He is my Lord and Savior that died on the cross for my sins to give me eternal life, and an everlasting relationship with Him.
WE WILL WRITE A CUSTOM ESSAY SAMPLE
ON ANY TOPIC
SPECIFICALLY FOR YOU FOR ONLY $13.90/page
Order now
Related Essays
What It Means to Be a Christian

An Essay Comparing Joshua and Jesus

The Ressurection of Jesus Christ

In the following paragraphs, I will analyze and critique the article “The…

More than Just a Dance: What Samba Means to Brazil

What Chemistry Means to Me

Knowledge and What It Means to Be Educated

By what means does Ford Coppola convey his message

Discuss what specific qualities you feel constitute what it means to be “human;” then apply that criteria to the characters in the novella

Truth be told, all humans are animals. Specifically, humans have supposedly evolved…

Dear friends, have your read the above excerpt from the scriptures, isn’t…

The Beatitudes of Jesus