Four major areas of Earth Science are:
Astronomy, Meteorology, Geology, and Oceanography
Astronomy is:
the study of objects beyond Earth's atmosphere. Astronomers study astronomy.
Meteorology:
studies the air that surrounds our planet. Meteorologists study the forces and processes that cause the atmosphere to change.
Geology is:
the study of materials that make up Earth and the processes that form and change these materials. Geologists identify rocks, study glacial movements, interpret clues to Earth's 4.6 billion-year history, and determine how forces change our planet, among many other things.
Oceanography is:
the study of Earth's oceans, which covers almost 75 percent of the planet. Oceanographers study creatures that inhabit salty water, measure different physical and chemical properties of the oceans, and observe various processes in these bodies of water.
Four Main Earth Systems are:
the lithosphere, the hydrosphere, the atmosphere, and the biosphere.
The Lithosphere is:
the rigid outer shell of the planet and includes the crust and the solid, uppermost part of the layer below the crust, the mantle.
The Hydrosphere is:
the water in the Earth's oceans, seas, lakes, rivers, and glaciers, as well as the water in the atmosphere.
The Atmosphere is:
the blanket of gases that surrounds our planet. Earth's atmosphere is necessary for respiration (breathing) by most living things, protects Earth's inhabitants from harmful radiation from the Sun, and helps to keep the planet at a temperature suitable for life. Earth's atmosphere contains about 78 percent nitrogen and 21 percent oxygen.
The Biosphere:
includes all organisms on Earth as well as the environments in which they live.
Scientific Method is:
a planned, organized approach to solving a problem. (1) Observation (2) Hypothesis (3) Experimentation (4) Data Analysis (5) Interpretation (6) Conclusions
Variables and controls in a scientific experiment are:
a constant variable, an independent variable, and a dependent variable.
Constant variable is:
quantities that should remain the same (constant) and not change from one trial to the next.
Independent variable is:
the variable changed by the scientist (under the control of the scientist). Graphed on the horizontal or x axis.
Dependent variable is:
the variable caused by the independent change (what you are measuring). Graphed on the vertical or y axis.
Compare and contrast Earth's Lithosphere and Asthenosphere:
The Lithosphere is rigid/solid. The Asthenosphere is partially molten and flows. They are interdependent systems.
In what field do scientists study the processes that change Earth's composition?
Geochemistry
True or False: The Atmosphere, Biosphere, Hydrosphere, and Lithosphere are interdependent systems.
True
True or False: The water in Earth's oceans, seas, lakes, rivers, and glaciers makes up the Atmosphere.
False--those make up the Hydrosphere.
How can a scientific hypothesis become a theory?
A scientific hypothesis becomes a theory when it is proven to be true. 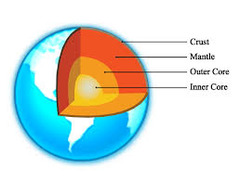 What are the Earth's layers from the inside out?
Inner core, outer core, mantle, and crust.
Explain your dependence on each of Earth's four systems.
Biosphere: people, animals, plants Atmosphere: breathing Lithosphere: driving on the roads Hydrosphere: drinking water, swimming, showering
Compare and contrast Scientific Theories and Laws. Give an example of each.
A Scientific Law is considered a fact and proven (but could be disproved at a future date). An example of Scientific Law is that energy can neither be created nor destroyed. A Scientific Theory is generally accepted by scientists as the best explanation right now. Examples of Scientific Theory is the Big Bang theory or the theory of Evolution.
How might elements of Earth's Hydrosphere interact with Earth's Lithosphere?
At Independence Lake, the water (Hydrosphere) comes up to the sand on the shore line (Lithosphere).
WE WILL WRITE A CUSTOM ESSAY SAMPLE
ON ANY TOPIC
SPECIFICALLY FOR YOU FOR ONLY $13.90/page
Order now
Related Essays
Earth Science Ch.12 Earth's Evolution Through Geologic Time

How long ago did Earth form? About 4.56 billion years ago What…

Which of the following is an example of a renewable resource ?…

Besides water, what does the water cycle transfer around the earth? latent…

AP Biology, Chapter 25 The History of Life on Earth

1. Give examples of macroevolutionary change. Emergence of terrestrial vertebrates Impact of…

Chapter 25: The History of life on Earth

When geologists refer to the “Big Five,” what are they referring to?…

Cyanobacteria increased the levels of carbon dioxide in the atmosphere. F Geologic…