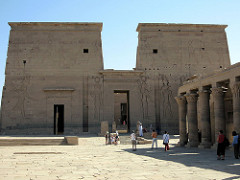 Pylon
A pair of truncated, pyramidal towers flanking the entrance to an Egyptian temple. (Temple of Horus at Edfu) 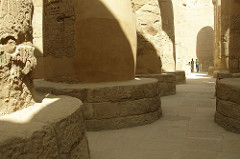 Hypostyle
A hall with a roof supported by rows of columns. (Temple of Amon-Re at Karnak)
Hierarchical scale
The representation of more important figures as larger than less important ones (Victory Stele of Narim-Sin)

Register
One of a series of rows in a pictorial narrative (Standard of Ur^, Palette of King Narmer) 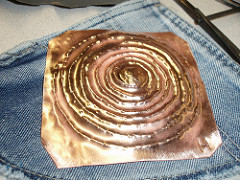 Repousse
A technique in which a relief is formed on the front by hammering a metal plate from the back. (Funerary masks of Mycenae) 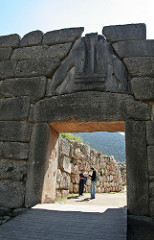 Corbelled vault
A vault formed by the piling of stone blocks in horizontal courses, cantilevered inward until the two walls meet in an arch. (Lions Gate at Mycenae, also includes relieving triangle)

Kouros
An Archaic Greek statue of a standing nude male.

Kore
An Archaic Greek statue of a standing, draped female. 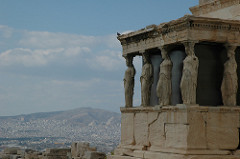 Caryatid
A column carved to represent a woman. (The Erechtheum) 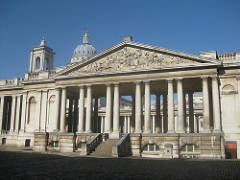 Pediment
In Classical architecture, the triangular section of a temple root often decorated with sculpture. 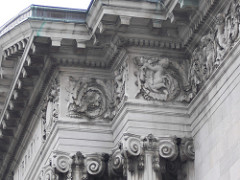 Entablature
In Classical architecture, the part of a building above the columns and below the roof. The ________ of a Classical temple includes the architrave, frieze, and cornice.
Contrapposto
The relaxed natural pose, or "weight shift" first introduced in Greek sculpture in 480 bce, separating Classical from Archaic (Kritios Boy - not featured) 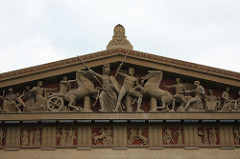 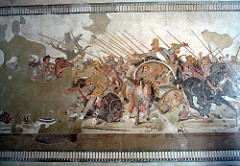 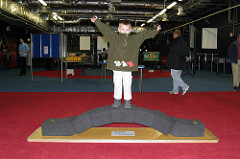 Voussoir
A wedge-shaped block used in the construction of a true arch. The central ________, which sets the arch, is called the Keystone. 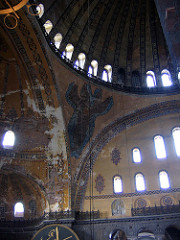 Pendentive
"Dome supports"; The concave triangular section of a vault that forms the transition between a square or polygonal space and the circular base of a dome. (Hagia Sofia)

Iconoclasm
A movement in the Byzantine Empire that favored banning and destroying images (especially of Biblical figures). 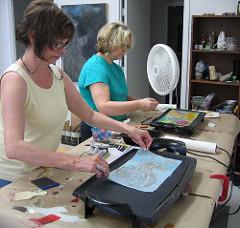 Encaustic
A painting technique in which pigment is mixed with wax and applied to the surface while hot. 6th & 7th century Byzantine artists used encaustic to create panel paintings (Jasper Johns did the same in "Flag")
Enamel
A technique in which powdered glass is applied to a metal surface in a decorative design. 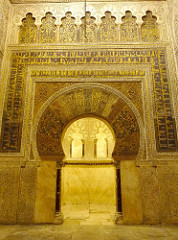 Mihrab
A semicircular niche set into the qibla wall of a mosque.
Westwork
The facade and towers at the western end of a medieval church, principally in Germany. 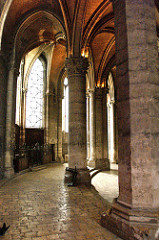 Ambulatory
The passageway around the apse and choir of a church, originally a feature of Romanesque churches that developed in connection wither their use as pilgrimage centers. 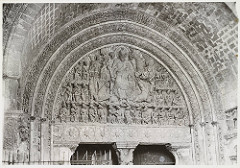 Tympanum
The lunette-shaped space above the portals of Romanesque and Gothic churches. 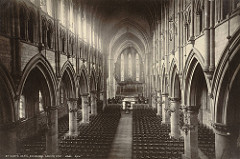 Clerestory
A row of windows in the upper part of a wall. 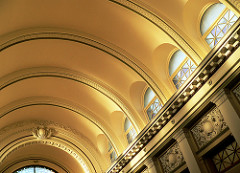 Barrel vault
A vault is a roof or ceiling. A _____ vault is, in effect, a deep arch or uninterrupted series of arches. Roman architects used _____ vaults in the construction of the Colosseum and the Baths of Caracalla. One of the characteristic features of Romanesque churches. 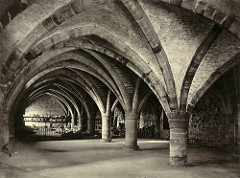 Groin vault
Vault formed at the point at which two barrel vaults intersect at right angles. _____ vaults are one of the characteristic features of Gothic cathedrals. 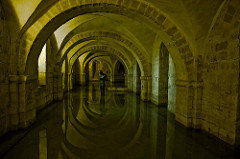 Crypt
A vaulted space usually located under the apse of a church. Because a _____ is wholly or partly underground, it is not found in the nave elevation of a church. 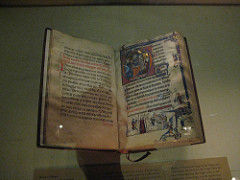 Vellum
Calfskin prepared as a surface for writing or painting. (The Lindisfarne Gospels use tempera on this, and the calendar pictures of Les Tres Richels use ink on this.)
Diptych
A two-paneled painting or altar piece. (The Melun ______ by Jean Fouquet) 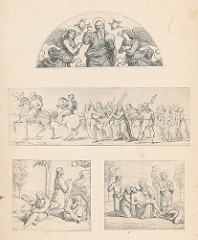 Predella
The painted or sculpted lower portion of an altarpiece that relates to the subjects of the upper portion.
Chiaroscuro
In drawing or painting, the treatment and use of light and dark, especially by gradations of light that produce the effect of mottling. Masaccio demonstrated his mastery of _____ in the "Tribute Money".
Cartoon
In painting, a full-size preliminary drawing from which a painting is made. Da Vinci's "Virgin and Child with Saint Anne and the Infant Saint John" is a famous example.
Ecorche
A figure painted or sculpted to show the muscles of the body as if without skin. (Pollaioulo's "Battle of 10 Nudes")

Orthogonal
A line imagined to be behind and perpendicular to the picture plane. In painting, appear to recede toward a vanishing point. Can be clearly seen in Perugino's Christ Delivering the Keys of Heaven
Intaglio
A graphic technique in which the design is incised, or scratched, on a metal plate, either manually (engraving) or chemically (etching). Reverse of woodcut technique.
Impasto
Technique in which the artist applies thick layers of oil paint. Both Rembrandt & Van Gogh used this in their works.
Japonisme
The French fascination with all things Japanese. Emerged in the 2nd half of the 19th century. Impressionists & post-Impressionists were particularly impressed with the use of bold contour lines, flat areas of color, and cropped edges in Japanese woodblock prints. 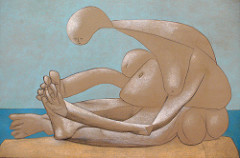 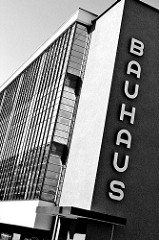 Bauhaus
A school of architecture in Germany in the 1920s under the leadership of Walter Gropius. 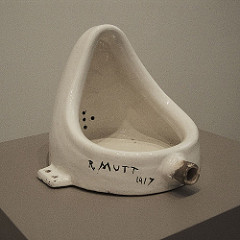 Ready-made
An ordinary object that, when an artist gives it a new context and title, is transformed into an art object. Were important features to Dada and Surrealism movements of early 20th century. (Marcel Duchamp's Fountain.) 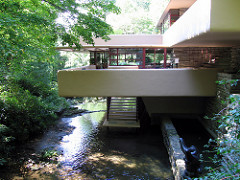 Cantilever
A beam of structure that is anchored at one end and projects beyond its vertical support. (Fallingwater, Frank Lloryd Wright)
Biomorphic
An adjective used to describe forms that resemble or suggest shapes found in nature. Not abstract shapes. (Painting and Composition by Joan Miro) 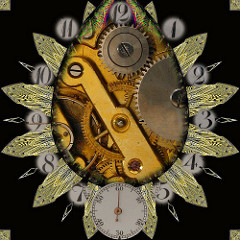 Photomantage
A composition made by pasting together pictures or parts of pictures, especially photographs. (Hannah Hoch and Romare Bearden) 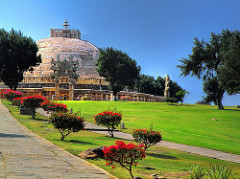 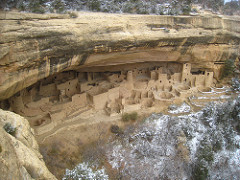 Peublo
A communal multistoried dwelling made of stone or adobe brick by the Native Americans of the Southwest. (Cliff Palace at Mesa Verde)
Mudrah
In Buddhist and Hindu iconography, a stylized and symbolic hand gesture.
Ukiyo-e
Japanese for "pictures of the floating world". Style of Japanese genre painting that influenced 19th century western art.
WE WILL WRITE A CUSTOM ESSAY SAMPLE
ON ANY TOPIC
SPECIFICALLY FOR YOU FOR ONLY $13.90/page
Order now
Related Essays
AP Art History: Art Terms

Pylon A pair of truncated, pyramidal towers flanking the entrance to an…

The Kaaba, Mecca Who: n/a What: The Kaaba When: n/a Where: Mecca…