The speech I will be presenting is titled “What Libraries Mean to the Nation. ” It was given by Eleanor Roosevelt on April 1st, 1936 at the District Of Columbia Library Association Dinner. Many speeches where given at this event a few topics include The Library of Adult Education, Our National Library, and The Libraries of Washington. I have thought a good deal about the fact that there are so many places in the United States that have no libraries, that have no way of getting books. Without libraries, without education, we cannot have educated citizens who will carry on successfully our form of government.

One of the things, that I have been particularly grateful for in the years of the depression, is that we have discovered so many things that we had not known before. They did not happen to think about them, and one of those things, that we used to be able to hide, is the areas of the country which are not served in any way by libraries. I have lived in the country, in a state which prides itself in spending much money on education, I am quite sure that some people think there is no lack of education and no lack of library facilities.

What libraries mean to the nation specifically for you

I know one place in the northern part of New York State where they use school books which have been passed down from one child to another. They have practically no books outside of the textbooks. In one of the biggest and richest states in the country, we had a big area that needed books and needed libraries. But we do have to learn to love books, you do have to learn how to read them, you do have to learn that a book is a companion and that is done in many different ways. 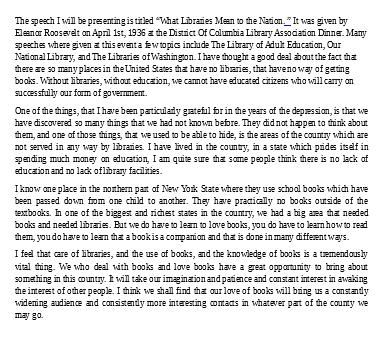 I feel that care of libraries, and the use of books, and the knowledge of books is a tremendously vital thing. We who deal with books and love books have a great opportunity to bring about something in this country. It will take our imagination and patience and constant interest in awaking the interest of other people. I think we shall find that our love of books will bring us a constantly widening audience and consistently more interesting contacts in whatever part of the county we may go.

The major growth drivers for brokerage revenue and trading volume are: ?…

Prompt: IKEA, merely another merchandise arrangement pulled by Chuck Palahniuk, or is…

According to the passage, how can the Moon hide the Sun during…

Over-use of computer , if not be careful , the most likely…

This population is growing fast. Its important feature is that it has…