The A ‘case, a go / no-go project evaluation regarding improvements to a polypropylene production plant. The B ‘case, checked the same project, but from a higher level, where the executive is an either / or investment decision between two mutually exclusive projects. The goal of the two cases is to expose students to a broad range of capital budgeting … Read more » These two cases to consider the investment decisions of managers of large chemical companies are made in January 2001.

The A ‘case, a go / no-go project evaluation regarding improvements to a polypropylene production plant. The B ‘case, checked the same project, but from a higher level, where the executive is an either / or investment decision between two mutually exclusive projects. The goal of the two cases is to expose students to a broad range of capital budgeting issues, which include, among other things, the identification of relevant cash flows, the critical assessment of a capital-investment rating system, the classic “cross-over” problem in the project agree rankings based on the net present value (NPV) and internal rate of return (IRR).

Victoria Chemicals Plc B Merseyside And Rotterdam Projects specifically for you

His is an analysis of the two discounted cash flows that will be used in summarizing the financial impact that this capital improvement to the polypropylene line will have on the Rotterdam business volume. The difference in the cash flow is brought by the adjustment of the cannibalization effect that is experienced when erosion is done at the Rotterdam business to aid in improving the polypropylene line. The investment cost as attached to the memo is 12 million sterling pounds. The analysis on the net present value of both the situations will be carried out to determine the impact of carrying out the erosion. 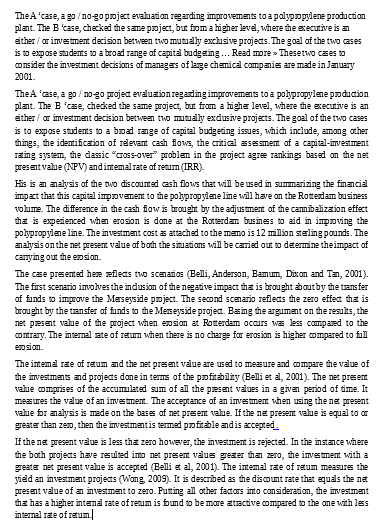 The case presented here reflects two scenarios (Belli, Anderson, Barnum, Dixon and Tan, 2001). The first scenario involves the inclusion of the negative impact that is brought about by the transfer of funds to improve the Merseyside project. The second scenario reflects the zero effect that is brought by the transfer of funds to the Merseyside project. Basing the argument on the results, the net present value of the project when erosion at Rotterdam occurs was less compared to the contrary. The internal rate of return when there is no charge for erosion is higher compared to full erosion.

Putting this into consideration, the net present value and internal rate of return were found to be higher when there was no inclusion or adjustment for erosion. This hence results in a decision involving declining or rejecting the erosion being made. According to the final revised discounted cash flow presented, the projected incremental profit has increased from the years 2013 to 2017. This is the case where no adjustments of the erosions have been made. The two cases also depict that the profits are greater where there in no erosion has compared where the erosion has been adjusted.

The effect brought by erosion includes the cannibalization effect which will impact the firm negatively. The net present value has been adjusted based on the same discount rate of 10 percent. Given the years 2013 to 2017, the NPV when there is full erosion is as follows: Initial investment is 12 million pounds. The projected cash flows for the period include 2. 72, 2. 81, 2. 87, 2. 93 and 3. 01 million respectively. The net present value is -1. 18 million sterling pounds. IRR is calculated as the future value of an investment divided by the present value adjusted by the number of years.

The implications here are that the present values of all the cash flow for the five year period, discounted at 10 percent has exceeded the cost the investment incurred. This for instance means that the investment will add value if no erosion of the Rotterdam was done. The results also prove that incase full erosion was done; the effect the investment would have on the existing investments would be negative. This is proven by the deduction made by the cannibalization effect that reduced the operating profits as projected. The negative results of the net present value have also proven that.

The internal rate of return for the cash flows that included the erosion was found to be less compare to the cash flows that did not include the cannibalization effect brought about by erosion (Wong, 2009). With respect to the future operations of the company, if the erosion is carried out, the firm will experience lower cash flows than when no erosion is done. This will also not be adding value to the firm as predicted by the ne present value. This decision will be made based on the assumptions that were made during the projection of the cash flows.

The cost of goods was assumed to be 3. 0 percent (Wong, 2009). From the analysis above therefore, the effects of the cannibalization that is brought by the erosion reduce the operating profit of the project. Rotterdam project business volume before the erosion yields an incremental profitability that is much higher than when it is eroded. The introduction of a new product would therefore lower the projects revenue. There is a constant loss of the Rotterdam output of 17500 sterling pounds and varying amounts of revenue lost spread throughout the period.

Ethical standards in financial reporting are vital. Elements of financial management and…

From birth to the day we die, humans are constantly changing and…

Impacts of Mass Media on Culture

The difficult child is the child who is unhappy. He is at…

In Cosi, a semi- autographical play by Louis Nowra, various characters are…