The dissenting opinion in that case sought to sideline issues of race when envisioning public policy and this view rose to prominence during the ensuing Civil rights Movement of the 1960's. Utilitarianism posits that democracy is essentially enabled through Procedural Equality. Another associated aspect in regards to utilitarianism is the notion of Strong Neutrality which asserts that judgments based in utilitarianism should be based solely on the nature of outcomes to result in positive impact.

Procedural Equality specifically for you 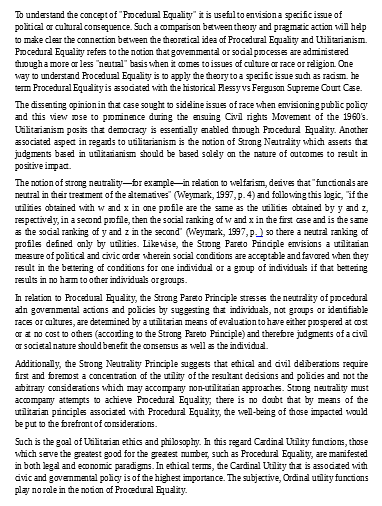 The notion of strong neutrality -- for example -- in relation to welfarism, derives that "functionals are neutral in their treatment of the alternatives" (Weymark, 1997, p. 4) and following this logic, "if the utilities obtained with w and x in one profile are the same as the utilities obtained by y and z, respectively, in a second profile, then the social ranking of w and x in the first case and is the same as the social ranking of y and z in the second" (Weymark, 1997, p. ) so there a neutral ranking of profiles defined only by utilities. Likewise, the Strong Pareto Principle envisions a utilitarian measure of political and civic order wherein social conditions are acceptable and favored when they result in the bettering of conditions for one individual or a group of individuals if that bettering results in no harm to other individuals or groups.

In relation to Procedural Equality, the Strong Pareto Principle stresses the neutrality of procedural adn governmental actions and policies by suggesting that individuals, not groups or identifiable races or cultures, are determined by a utilitarian means of evaluation to have either prospered at cost or at no cost to others (according to the Strong Pareto Principle) and therefore judgments of a civil or societal nature should benefit the consensus as well as the individual.

Additionally, the Strong Neutrality Principle suggests that ethical and civil deliberations require first and foremost a concentration of the utility of the resultant decisions and policies and not the arbitrary considerations which may accompany non-utilitarian approaches. Strong neutrality must accompany attempts to achieve Procedural Equality; there is no doubt that by means of the utilitarian principles associated with Procedural Equality, the well-being of those impacted would be put to the forefront of considerations.

Such is the goal of Utilitarian ethics and philosophy. In this regard Cardinal Utility functions, those which serve the greatest good for the greatest number, such as Procedural Equality, are manifested in both legal and economic paradigms. In ethical terms, the Cardinal Utility that is associated with civic and governmental policy is of the highest importance. The subjective, Ordinal utility functions play no role in the notion of Procedural Equality.

The importance of Procedural Equality to the ethical system of Utilitarianism is that of a macrocosmic theory being applied in microcosmic, or at least, specific, form. The great advantage of Utilitarianism over other ethical systems is its ability to be both quantified and precisely measured. For the most part, by applying the Principles of Strong Neutrality, the Strong Pareto principle, and the notion of Cardinal Utility functions, to a specific issue such as Procedural Equality, the pragmatic and theoretical dimensions of Utilitarian ethics are made manifest.

Related Essays
How Organizational Policies and Procedures Can Impact Ethics

Organizational policies and procedures are usually what guide a company. It communicates…

The American Red Cross is a nongovernmental, nonprofit organization that is led…

Well, history doesn’t really state who or when It was invented, but…

Why Kennedy decided to blockade Cuba

President Kennedy decided to blockade Cuba for many reasons. One of the…

The Early Stages of Psychology