Their was a man who joined the military and knowing that he may not come back alive, but he still joined. There were certain who mock him; told him he wouldn’t even last boot camp, but he still went on. He met danger face to face, but he still didn’t back down. He stood his ground. He served his for twelve years and he took pride in those twelve years he had served his country. He always said, “that one man can make a difference. ” It depends on if you believe it or not. It depends on you as a person to make the decision.

Don’t look at past in despair, but look towards the future and prepare for it, because when it comes you’ll be ready, to take on a new challenge” he said. If you are prepared to join the military; then expect to make a difference, if you are stuck behind a desk or in the field you will be making a difference wherever you go and just like that man who joined the military twelve years ago and was proud in doing so. You might be not where want to be, but at least you are making an impact. There was another man that joined and didn’t stop at twelve; he went on to be one of the most influential people in the military.

One Man Can Make a Difference specifically for you 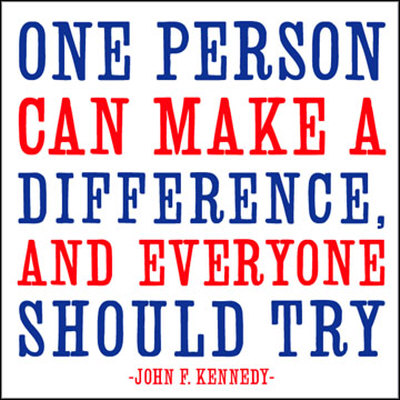 He was in Special Forces, but he didn’t like to talk about it. However, one time he told me that he wasn’t proud of killing people, but he was proud at the fact that he was doing something for his country. He took pride in the fact that he didn’t back down when things got tough. Also, just the fact that he is doing something bigger than himself. Serving his country without fail. Both of these men have many similarities, but both of them had different outlooks on life, but they still had the same goal. They served in the military, they both were Christians, there were both stationed in Afghanistan.

When they were in Afghanistan, God spoke to both the men and said, “Can you make a difference? Stand up be men of courage, fight the enemy with all you strength and then some. Give it your best and don’t stop at your best, keep going. ” Both the men stood and pondered at what God just said to them. Questions arose and doubt like “How could I make a difference, am I good enough? Why did he pick me? ” But as God slowly was working in both of their lives. They began to see what God had in store for them. Both of them now wanted to please God with all their heart, but as you and I both now that trail and tribulation, happens and many people were always amazed at these two Christians that served God, were such strong believers in Christ.

They both have pride that one-day they can look back and say “I did something for my country, and I know that what I did was right in the of God! ” These men went to my church faithfully and were a tremendous influence in my life. They taught me that don’t give up, keep fighting, keep pushing back, and when you accomplish something that is arduous, take pride in the fact that you completed something that pushed your limits, but kept going.

The use of budgets will not guarantee success, but they do help…

The Transformation of Amway in China

Q.1 Why did Amway have to change its basic operating models twice…

A)In what ways did Hatshepsut portray herself as a male pharaoh? While…

Answer all questions in the spaces provided. The drawings show three cells….

The Role Of The Purchasing Department Commerce Essay

Retention And Motivation Of The Employee Business Essays