This device has been developed to construct a reliable protection system. The study compares the difference of laser light activated alarm to the other commercial detector. There were several test of effectiveness of the device in terms of its ability to warn owners with the loudness of sound, amount of the energy used and percent of accuracy. The cost of the device was also considered for to prove the acceptability of the device. The device was developed to use a light activated alarm which has detecting diode or the photocell, which turns the device on when the photocell (sensor) detects light. 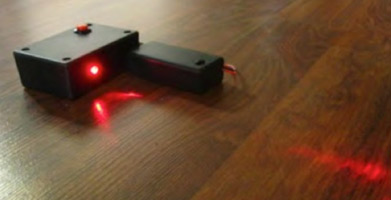 The experiment prove that the Laser Light Activated Alarm produces the competitive sound intensity of 90 -100 dB and the cost of energy consumed of P 2. 07 an hour. The commercial cost of P 1,000 was proven to have a lower commercial price than the other two commercial detectors. The ideal laser position was traced to complete the whole operation. Data of different commercial alarms were gathered to be compared to the newly developed Laser light Activated Alarm. It was made from the cheapest material, which performs its tasks better than the commercial detection alarms with the same concept.

The Laser Light Activated Alarm was proven to be convertible enough to fit on any sizes of doors and windows and can be operated and assembled as easy as the other expensive devices. However, it is recommended that further test be done to really verify its efficiency. Related Literature:May 16, 1960: Theodore H. Maiman, a physicist at Hughes Research Laboratories in Malibu, Calif. , constructs the first laser using a cylinder of synthetic ruby 1 cm in diameter and 2 cm long, with the ends silver-coated to make them reflective and able to serve as a Fabry-Perot resonator. Maiman uses photographic flashlamps as the laser’s pump source.

July 7, 1960: Hughes holds a press conference to announce Maiman’s achievement. 1972: A laser beam is used at Bell Labs to form electronic circuit patterns on ceramic. May 2009: The University of Rochester’s Chunlei Guo announces a new process that uses femtosecond laser pulses to make regular incandescent light bulbs superefficient. The laser pulse, trained on the bulb’s filament, forces the surface of the metal to form nanostructures that make the tungsten become far more effective at radiating light. The process could make a 100-W bulb consume less electricity than a 60-W bulb, Guo says.

This circuit is a laser alarm system like the one we see in various movies. It uses a laser pointer beam to secure your valuables and property. Essentially, when the beam gets interrupted by a person, animal or object, the resistance of a photodiode will increase and an alarm will be activated. The laser and the receiver can be fitted in same box, sharing a common power supply. As the receiver draws less than 10 mA on average, you’ll soon find that the laser is the most current hungry device! Mirrors are used to direct the beam in whatever setup you require. Examples of a passage and an area protected by the alarm are shown in the diagram.

In the circuit diagram we find a TL072 op-amp (IC1. A) configured as voltage comparator between the voltage reference provided by the adjustable voltage divider P1/R4 and the light-dependent voltage provided by the voltage divider consisting of photodiode D1 and fixed resistor R3. When the laser beam is interrupted, the voltage on comparator pin 2 drops below that at pin 3, causing the output to swing to (almost) the positive supply voltage and indicating an alarm condition. This signal can drive a siren, a computer or a light that hopefully will deter the intruder.

Go to www. funderstanding. com. This web site has about learning in…

Many factors influence the development and socialization of American students including peers,…

Clinical placements for nursing students, is often regarded as the most useful…