Geopolitical Populations specifically for you 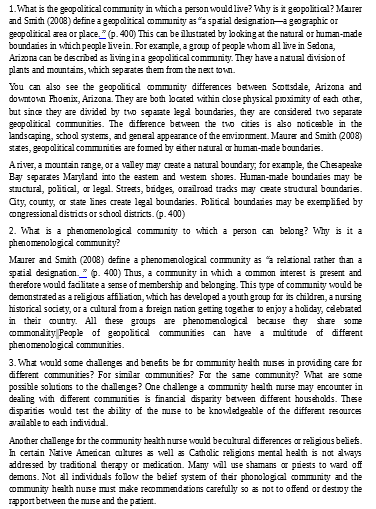 Maurer and Smith (2008) define a phenomenological community as “a relational rather than a spatial designation. ” (p. 400) Thus, a community in which a common interest is present and therefore would facilitate a sense of membership and belonging. This type of community would be demonstrated as a religious affiliation, which has developed a youth group for its children, a nursing historical society, or a cultural from a foreign nation getting together to enjoy a holiday, celebrated in their country. All these groups are phenomenological because they share some commonality. People of geopolitical communities can have a multitude of different phenomenological communities.

Another challenge for the community health nurse would be cultural differences or religious beliefs. In certain Native American cultures as well as Catholic religions mental health is not always addressed by traditional therapy or medication. Many will use shamans or priests to ward off demons. Not all individuals follow the belief system of their phonological community and the community health nurse must make recommendations carefully so as not to offend or destroy the rapport between the nurse and the patient.

This would help reduce any hysteria created by the news. The nurse can also monitor statistical results more closely. Maurer and Smith (2009) indicate that the focus of the community nurse should include environment, housing, transportation, education, and political process subsystems. All of these elements are related to geographic locations, as well as the population composition and distribution, health services, and resources and facilities. Statistical and epidemiologic studies are frequently based on data from specific geopolitical areas. (p. 400)

The Design of Crushing Plant with Capacity 150 Tph

This crushing plant is specially designed for output of 100-120 tph. In…

Rene Descartes is generally considered the father of modern philosophy. He was…

The Lumber Room and The Rocking Horse Winner

How Christian and Muslim beliefs would affect their behaviour