In the story “From a Short Narrative of my Life,” Samson Occom tells us about his life growing up with the White people being a young Native. During this time, Samson really tries to make an impact in the lives of the children after being accepted in by Reverend Wheelock during his youth as a pupil. He was well known for training young Indians to become missionaries to their people. He would teach Occum how to read and he would support him while he dedicated himself to build up a school to teach his people.

After this point in time Occom separate his relationship with Wheelock because he didn’t take care of his family like he promised and his school stopped ministering to Native American students. Occom soon had his own understanding of religion and began to reach out as a Preacher to the Native community. He started with the youth and he is well away at the same time that criticisms can become high because he is a “poor Indian. ” The author of this story is Samson Occom.

I believe this story was really influenced by the way of life Occom had to endure. He was a very poor Indian so no one thought of him as superior or even established. Coming from a poverty stricken family help him build of great character and drive as if he will never give up on his beliefs or goals in life. This is portrayed throughout the story because no matter what obstacle got in his way Occom seemed to have an answer and overcame the circumstances. 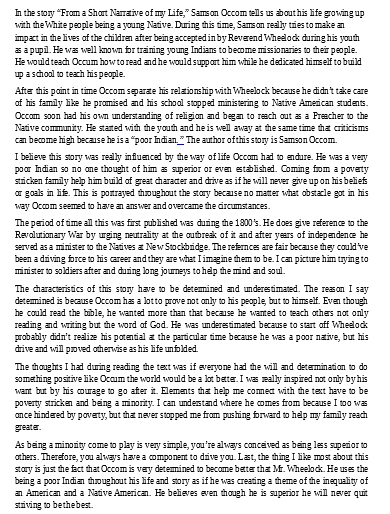 The period of time all this was first published was during the 1800’s. He does give reference to the Revolutionary War by urging neutrality at the outbreak of it and after years of independence he served as a minister to the Natives at New Stockbridge. The refernces are fair because they could’ve been a driving force to his career and they are what I imagine them to be. I can picture him trying to minister to soldiers after and during long journeys to help the mind and soul.

The characteristics of this story have to be determined and underestimated. The reason I say determined is because Occom has a lot to prove not only to his people, but to himself. Even though he could read the bible, he wanted more than that because he wanted to teach others not only reading and writing but the word of God. He was underestimated because to start off Wheelock probably didn’t realize his potential at the particular time because he was a poor native, but his drive and will proved otherwise as his life unfolded.

The thoughts I had during reading the text was if everyone had the will and determination to do something positive like Occum the world would be a lot better. I was really inspired not only by his want but by his courage to go after it. Elements that help me connect with the text have to be poverty stricken and being a minority. I can understand where he comes from because I too was once hindered by poverty, but that never stopped me from pushing forward to help my family reach greater.

As being a minority come to play is very simple, you’re always conceived as being less superior to others. Therefore, you always have a component to drive you. Last, the thing I like most about this story is just the fact that Occom is very determined to become better that Mr. Wheelock. He uses the being a poor Indian throughout his life and story as if he was creating a theme of the inequality of an American and a Native American. He believes even though he is superior he will never quit striving to be the best.

Perestroika Emergence of the Modern World Gorbachev and Perestroika In 1985, Soviet…