What is rifling? What two types of markings does this produce?

Firearm and Crime Scene specifically for you

Rifling is the spiral grooves cut into the barrel of a gun in order to make a bullet spin as it is fired. The two types of markings that rifling produces is grooves and lands.

What is a distance determination? How is this done?

Distance determination is the process of estimating the distance between where a shot is fired and it's target. This is done by examination,testing and comparisons of residues.

What is the Greiss Test?

The Greiss test is a test that uses chemicals to develop gunpowder residue patterns, particularly around bullet holes.

When a bullet is retrieved, how is it marked for identification purposes? What should be avoided?

When a bullet is retrived it is marked for identification purposes with the investigator's initials, often at the tip or base of the bullet. The sides of the bullet should not be marked.

If you found a firearm at a crime scene, what steps would you take in order to transport the weapon to the lab?

If I found a firearm at a crime scene the steps i would take in order to transport the weapon to the lab would be to first ensure that the firearm will not discharge accidentally on the way to the lab. This often means that the gun will need to be unloaded before it is transported or handled in analysis. A note should be made about the position of the gun's safety and hammer. Each round taken from the firearm is placed in a separate envelope. 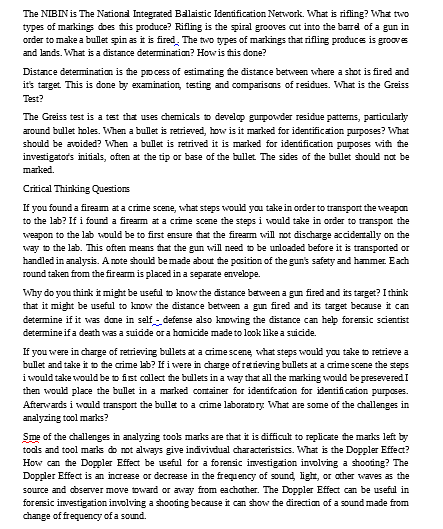 Why do you think it might be useful to know the distance between a gun fired and its target?

I think that it might be useful to know the distance between a gun fired and its target because it can determine if it was done in self - defense also knowing the distance can help forensic scientist determine if a death was a suicide or a homicide made to look like a suicide.

If you were in charge of retrieving bullets at a crime scene, what steps would you take to retrieve a bullet and take it to the crime lab?

If i were in charge of retrieving bullets at a crime scene the steps i would take would be to first collect the bullets in a way that all the marking would be presevered.I then would place the bullet in a marked container for identifcation for identification purposes. Afterwards i would transport the bullet to a crime laboratory.

What are some of the challenges in analyzing tool marks?

Some of the challenges in analyzing tools marks are that it is difficult to replicate the marks left by tools and tool marks do not always give indivivdual characteristsics.

Intelligent, strikingly attractive, and distinguished by her deep moral sensitivity and passionate…

Is Prayer Is a Waste of Time

Prayer is not a waste of time because; it helps people to…

Born May 7, 1840 in Votkinsk, Russia, Tchaikovsky was a famous composer…

A Summary by Michael Alberico

Mary Jane and Dan had moved their family to Seattle, do to…

The Major Anatomical Regions, Directions and Cavities of the Human Body