In Richard Rodriguez’s article, “Does America Still Exist?” my mind opened to another view on the topic of immigration in the United States. My beliefs had always been that if anyone is not an American citizen who were paying their taxes here, then you should not be allowed in our country. After reading this article and seeing the immigrant’s perspective, I learned that America is full of immigrants and that we are all here for the same reason, The American Dream. I loved the lines in paragraph seven, “We are gathered together-but as individuals, with separate pasts, distinct destinies.

Our society is as paradoxical as a Puritan congregation: We stand together, alone.” (360) What that quote meant to me was that although we are all living in America (the country that pledges allegiance to the diversity), we still look for differences in everybody opposed to embracing their commonalities. For example, when people would ask the writer where he was from in order to decipher the darkness of his skin tone. Even though in this country everyone is allowed to get an education, to study other ethnicity’s of the world.

Does America Still Exist specifically for you

To be allowed to pursue a job on whichever career I follow through, at the end, I am who for I am and not to be judged from my ethnicity. That has what America done for me. I come from a family that was from Mexico who illegally moved to California to start a new life, to pursue the American Dream. My parents who were immigrants started with nothing when they came to the states. Now they have a family, a house to live in, and careers to support the ones they love. The hard working ethnicity that my parents have had influenced me to be a hard workingman. If you want something from this world, you must work hard for it. 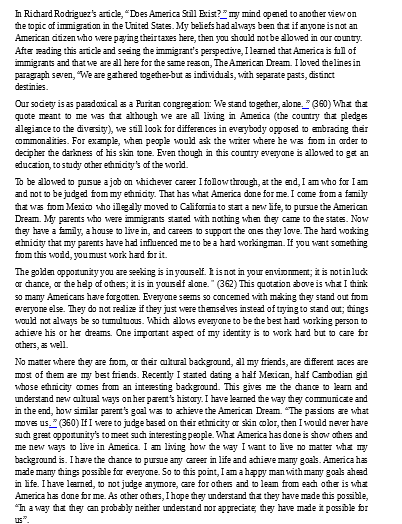 The golden opportunity you are seeking is in yourself. It is not in your environment; it is not in luck or chance, or the help of others; it is in yourself alone." (362) This quotation above is what I think so many Americans have forgotten. Everyone seems so concerned with making they stand out from everyone else. They do not realize if they just were themselves instead of trying to stand out; things would not always be so tumultuous. Which allows everyone to be the best hard working person to achieve his or her dreams. One important aspect of my identity is to work hard but to care for others, as well.

No matter where they are from, or their cultural background, all my friends, are different races are most of them are my best friends. Recently I started dating a half Mexican, half Cambodian girl whose ethnicity comes from an interesting background. This gives me the chance to learn and understand new cultural ways on her parent’s history. I have learned the way they communicate and in the end, how similar parent’s goal was to achieve the American Dream. “The passions are what moves us.” (360) If I were to judge based on their ethnicity or skin color, then I would never have such great opportunity’s to meet such interesting people.

What America has done is show others and me new ways to live in America. I am living how the way I want to live no matter what my background is. I have the chance to pursue any career in life and achieve many goals. America has made many things possible for everyone. So to this point, I am a happy man with many goals ahead in life. I have learned, to not judge anymore, care for others and to learn from each other is what America has done for me. As other others, I hope they understand that they have made this possible, “In a way that they can probably neither understand nor appreciate; they have made it possible for us.”

Al-Tmimi’s appeal to the Supreme Court is meritorious and should be granted….

Through out the 19th century history course I took this semester, I…

Thesis: Both Jacksonian economic policy and westward movement in America were indicative…

Geographically the area is within Maryland United States. It is one of…