The Hero’s Journey is an important concept, it is the template upon which a vast majority of successful stories and Hollywood blockbuster are based upon. Being able to analyze, understand and deconstruct the different capacities undertaken by the Hero is essential. The Hero’s Journey is a cycle made of super structures/steps which consists of both linkages and connections. It is composed of a beginning and an end, which ultimately are the same.

This full cycle is attained through periods of loss and gain (hardship) which in turn are subdivided into different sections, composed of micro mini stages which together act as stepping stones leading the hero full circle back to the beginning. The story of The Incredibles begins in the suburbs of a town called Metroville, where humans with superpowers were once seen as heroes. Mr. Incredible lives his days of glory rescuing the world and its people. This is where initiation occurs and it results in the hero meeting and later marrying his heroine, Elastigirl.

A Hero’s Journey: the Incredibles specifically for you

The meeting with the goddess represents the point in the adventure when one experiences a love that has the power and significance of the all-powerful. This is where the hero gains advice and training for the upcoming adventures. This can also be known as the “hieros gamos”, or sacred marriage, where the union of opposites comes together as one. Where the person begins to see him or herself in a non-dualistic way. Marriage is the start of a new world and a new beginning. 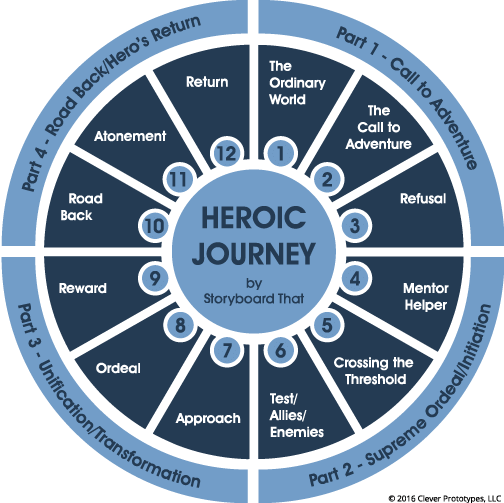 However, collateral damage from their various good deeds leads the government to create a “Supers Relocation Program”, forcing all 'heroes' to reintegrate into civilian life and to refrain from using any 'super powers'. This marks the death of the old state, which produces a contrast and symbolism between Death and New (oppressed and repressed). This period also acts as a time of reflection or regret as Mr. Incredible is faced with many trials and tribulations leading life as a mere human. Bob (Mr. Incredible) and Helen Parr (Elastigirl) who are both Supers, raise three children: Violet, Dash and Jack-Jack.

Both Violet and Dash have innate superpowers. Violet has the powers of invisibility and the ability to create force fields, whilst Dash's superpower enables him to run at high speeds. Both children face trials and tribulations as they are forced to repress their powers. Bob is back to ordinary life and has a job as an insurance broker. However, as he still misses his former days as Mr. Incredible. He and his Super Hero friend Frozone, still sneak out on Wednesday nights to fight crime. Frustration grows in Bob and one day he loses his temper with his boss, who refuses to allow him to help a victim who is being mugged.

This eventually leads to him being fired as his boss ends up in hospital due to Bob's use of super power force. This is an example of one of his 'road of trials' as he figures out what to tell his wife, who is trying to live an ordinary life. This is where an ordeal is introduced as secrets, lies and an inciting incident occurs. Bob receives a message from Mirage, who asks for Bob to help stop a rogue robot on a distant island, for a lucrative reward. After hardly any Refusal, Bob crosses the Threshold and he accepts the call to duty. Bob lies to Helen, stating that he must go on a business trip.

Mr. Incredible is back. He is living the Dream again. This is Bob's first Call to Adventure. Once Mirage has given Bob instructions, he arrives on the island. He successfully fights and terminates the powerful Omnidroid. At this point devolution starts to mature into evolution within the whole family. Bob is loving his great new life. His old self has dissolved and this is symbolized through him getting a new suit. This suit represents the start of a new beginning or a new journey. Helen however knows nothing of his new life. The fact that Mr. Incredible gave into temptation is not unusual.

We all do. The Bible says that “everyone sins. ” The Bible also says that this is what separates us from God, just as sin separated Bob from his family. In a very real sense, sins place us on an island of separation, and holds us captive to death itself. “For all have sinned;all fall short of God's glorious standard”--Romans 3:23. Bob is soon contacted for another mission on the island (Call to Adventure). This is where physical separation occurs as Mr. Incredible faces yet another one of his trials, this is where things are not what they seem.

On arrival, he finds the Omnidroid, rebuilt and reprogrammed to be stronger than before. Whilst being trapped by the robot, he meets its creator, the villain or Enemy Syndrome. Bob recognizes him as a young fan, Buddy, who dreamed of being Mr. Incredible’s sidekick but got in the way. Syndrome vows for revenge for this shunning and sets the Omnidroid to kill him. Bob manages to fake his death and hides from the robot. During this time he breaks into Syndrome's base and makes a startling discovery. He finds out that Syndrome has identified former Supers and has managed to annihilate them.

He is relieved that his family members are not in Syndrome's database. As mentioned earlier, Bob escapes death by jumping into water. Being one of the four elements, water not only protects him and gives him peace, it acts as a calming material. Furthermore, Bob's power, which can be associated with fire is calmed when brought together with water through alchemy as water kills the fire. Through this process Bob is brought back to his family concept as he is relieved that they are not mentioned in Syndrome's database. Meanwhile in the ordinary world, Helen begins to grow suspicious of Bob.

She learns that suits have been created for the entire family , and that each outfit has its own tracking device. She then triggers Bob’s, inadvertently revealing that he is trapped on a remote island in Syndrome’s headquarters and is in distress. Bob is in the cave, he is underground (under world), under the earth, in a special world. The earth element at this point represents stagnation and a Supreme Ordeal. His family is coming to the rescue. Helen, Violet and Dash (who have secretly slipped in by hiding in a bag) fly to Bob's rescue in a borrowed jet.

The element of air is introduced as they are flying through air. It represents the family's call to adventure as they wil also undergo tests and thereby serve as helpers in their own and their father's hero's journey. The element of fire is reintroduced as Syndrome shoots down the jet. Helen and the children fall into water which again acts as a protector. The family makes it ashore thereby reconnecting with the earth. Helen manages to rescue Bob and regroups with Violet and Dash, together as one, they outrun Syndrome’s guards.

However they are soon after captured by Syndrome, who identifies the entire family as Supers. Reunion of the family occurs in a cave (under world) with the presence of the element earth, which could represent the womb foreshadowing the rebirth of the superheroes. With the family contained, Syndrome explains that he will launch an Omnidoid to Metroville, sending the city into chaos. Upon which he will appear and, using a control band (in secrecy), will “subdue” the robot and become the city’s hero. The rocket with the Omnidriod is launched, and Syndrome follows it in an aircraft.

After his departure, Violet frees the family and, with Mirage’s help, they board a second aircraft to the city. This represents the magic flight back. The Omnidroid begins to destroy Metroville, and Syndrome enacts his plan, stopping the robot resulting in the people's cheers. However, the robot turns against Syndrome creating havoc in the city. The super heroes overcome tragedy and intervene by combining their super abilities with those of Frozone to terminate the robot. The city, as a result, welcomes them back as true heroes.

As they are driving back home, Helen anxiously calls the babysitter and learns that Syndrome has abducted Jack-Jack. Upon arrival, Syndrome is found lifting the toddler into his jet. He plans to raise the boy to fight against the Supers in the future. As Bob and Helen launch a rescue attempt, Jack-Jack reveals his powers of transformation, forcing Syndrome to drop him into Helen's awaiting arms. Syndrome attempts an escape but, thanks to Bob's intervention his cape is caught in the suction mechanism of his aircraft's engine thereby killing him.

The ruined plane crashes into the Parr's home, however Violet is able to protect the family from harm, by once again using her ability of creating a force field. Through this action the shy and concealed Violet has her time to shine and she regains her self esteem. This is the bringing of the elixir as the entire family is together and they have saved the world. The hero has confronted his shadow. The final conflict of overcoming Syndrome has been successfully carried out. The crossing of the return threshold was accomplished through coming back to earth and saving Metroville.

They have become master of the Two Worlds; the island and Metroville. For a human hero, this may mean achieving a balance between the material and spiritual worlds. One where the hero has become comfortable and competent in both the inner and outer worlds. This is exactly what Bob does, he has taken control of both worlds, and this gives him the freedom to live. Mastery leads to freedom from the fear of death, which in turn is the freedom to live. This is sometimes referred to as living in the moment, neither anticipating the future nor regretting the past.

Each member of the Incredible Family could represent an element, who when brought together as one, become indestructible. Mr Incredible presenting power and strength through fire, Elastigirl representing water as water can be bent and shaped into anything. Voilet and Dash could both either represent the earth or air as their powers are connected to both. The powers evolve and the capacities of the characters grow, as their hero's journey evolves. As the loop continues, their super egos grow as well. The Hero's Journey is a cycle that continuously repeats itself as all the interconnections and stages are rewoven.

In today’s modern society, technology plays a central role in the lives…

Organizations face increasing availability of information at all managerial levels. This induces…

Personality Psychology and the Biological Domain

Genetic, physiological, and biological factors that are present when a person develops…

“The human mind is our fundamental resource” said by John Fitagerald Kennedy….

The view that recognition is the only goal of visual perception

Imagine you have been abandoned in the middle

I am in an unknown place and I cannot see, but I…