September 11, 2001 (or better known as 9/11) is the most tragic event and unforgettable day in American history. It’s a day that marked great change in America, a day in which America was greatly wounded. The designated attackers on the World Trade Center were none other than Al Qaeda, that at the time were being led by a man named Osman Bin Laden. Their reason of attacking us is still being questioned, but the effect that their attack has had on America is easily noticeable.

After 9/11 the toll the attack had on American economy was greatly severe, due to the primary fact that we started a global war on terror. Immigration in America is now stricter than ever, the number of visa’s acquired by tourist and workers have dropped substantially; in addition, the security in America is at an all-time high, prior to 9/11. Now you may be asking how 9/11 changed the economy? Post 9/11 the economy definitely fell, money that was being spent on manufacturing goods and services now had to be funded to the military for the protection on terrorism.

9/11 Cause and Effect specifically for you

This is causing transportation for people, products and services to be more expensive, but that is not the major reason. The bulk of the costs related to the United States response to 9/11 arose a war on Iraq and Afghanistan. And if one regards the Iraq and Afghanistan war as arising from the terrorist attacks, these costs are quite likely to total more than $4 trillion a year, placing us deeper into debt (Yerger, 12-13). The cost of war is what is severely affecting our nation’s economy. 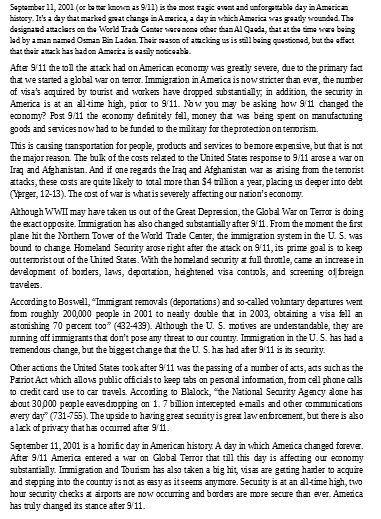 Although WWII may have taken us out of the Great Depression, the Global War on Terror is doing the exact opposite. Immigration has also changed substantially after 9/11. From the moment the first plane hit the Northern Tower of the World Trade Center, the immigration system in the U. S. was bound to change. Homeland Security arose right after the attack on 9/11, its prime goal is to keep out terrorist out of the United States. With the homeland security at full throttle, came an increase in development of borders, laws, deportation, heightened visa controls, and screening of foreign travelers.

According to Boswell, “Immigrant removals (deportations) and so-called voluntary departures went from roughly 200,000 people in 2001 to nearly double that in 2003, obtaining a visa fell an astonishing 70 percent too” (432-439). Although the U. S. motives are understandable, they are running off immigrants that don’t pose any threat to our country. Immigration in the U. S. has had a tremendous change, but the biggest change that the U. S. has had after 9/11 is its security.

The most obvious change the United States has had since 9/11 is security itself. People who wish to travel by plane must go through a length of security, which includes the checking of carry-on bags, removal of shoes and metal objects, and passing through high tech body scanner, which can detect any weapons or explosives if carried. In addition to the two hour security inspections you must in dour, there is a possibility you can also be selected for a random intense screening if suspicioned of being involved in terrorist acts.

Other actions the United States took after 9/11 was the passing of a number of acts, acts such as the Patriot Act which allows public officials to keep tabs on personal information, from cell phone calls to credit card use to car travels. According to Blalock, “the National Security Agency alone has about 30,000 people eavesdropping on 1. 7 billion intercepted e-mails and other communications every day” (731-755). The upside to having great security is great law enforcement, but there is also a lack of privacy that has occurred after 9/11.

September 11, 2001 is a horrific day in American history. A day in which America changed forever. After 9/11 America entered a war on Global Terror that till this day is affecting our economy substantially. Immigration and Tourism has also taken a big hit, visas are getting harder to acquire and stepping into the country is not as easy as it seems anymore. Security is at an all-time high, two hour security checks at airports are now occurring and borders are more secure than ever. America has truly changed its stance after 9/11.

Definitions and perceptions of the role and styles of risk management, and…

There are many different theorists regarding personality along with many theories. Each…

One of the oldest methods of research is the case study, in…