”My Little Bit of Country” is an essay from 2012, written by Susan Cheever. The main character is Susan Cheever herself and her life is descripted from she was a child until she got kids of her own, who grew up and became adults. The story mainly takes place in New York, while it illustrates how the big city life is to prefer compared to the life in the suburbs. One of the consequences caused by the industrialization in western society is how most people now live in the cities, where they in the past lived at the country.

We must assume that Susan Cheever is happy about this development, but is that the general opinion? As mentioned in the introduction, the story takes place in New York. The story starts with the protagonists’ first memory, where she remembers her father coming home after fighting World War second. Furthermore I must assume that it ends in the present time, which means that we have a timeline from the mid forty’s till 2012, chronological told. The narrator is a 1st person narrator with access to her own mind only, consequently it isn’t an omniscient narrator.

﻿My Little Bit of Country specifically for you 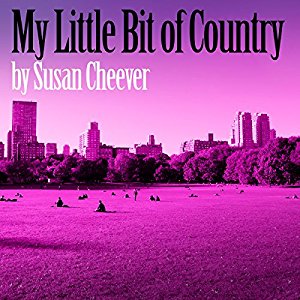 The style of the text is very fresh and kind of draws the reader’s attention towards the universe of Susan Cheever. She uses a lot of adjectives and metaphors which makes the reading very living; an example of this is to be found on page 10, lines 278-283: “One night the surface of the water heaved and buckled, and a turtle as big as a small car, a mossy prehistoric apparition in the middle of the city, inhaled the biggest chunk…” The way she writes, gives the reading of the text a rhythm that makes it hard not to finish the story.

The way Susan Cheever describes herself and the life she is living; I get the impression that she is a woman of habits. Sure she loves Central Park, but isn’t it kind of boring living the same place all your life, when you have the opportunity to go somewhere else and get new experiences? She is described as being very independent, page 8, lines 126-128: “as soon as I was old enough to take the train back in to New York I did so at every opportunity. ” The big contrast in this text is the difference between the suburbs and the life in New York.

The suburbs are described as a tedious place, where everything that happens is a bit monotonous, page 9, lines 145-154: “ I would wander all I wanted in the suburban woods and try to be interested in the skunk cabbage that bloomed in the spring and the interesting patterns made by rotting logs next to a brook and the jelly blobs of frog’s eggs in the pond, but none of it held a candle to the magnificent variety of the Conservatory Garden or even the rolling land around Cleopatra’s Needle.”

Here we get the sense of a boring place, when the suburbs are described, in contrast to the wonderful city of New York. The suburbs should be so safe, but still the silence and the animals in the woods is frightening our main character. In the story New York is portrayed as a wonderland for kids to grow up in compared to the suburbs, page 9, lines 168-172: “splashed in fanciful playground fountains in the summer, while their country friends played on mail-order swing sets and in plastic kiddy pools.”

I think one of the most important themes in this essay, is about growing up. It is frequently discussed where the best place for a child is to grow up. As mentioned, the text begins with her own experience of growing up in New York as a little child, which she was thrilled about. But isn’t the general opinion that kids has the best environment in the suburbs? For me too se, there is pros and cons, in both matters.

In the big city, a child will be under influence of many cultures which is positive, but it will also experience crime, drunks, violence and so one from a very young age. Nevertheless an individual raised in New York, will tense to have a more open mind towards people who stand out, compared to a child raised in the suburbs. The most striking theme in the text is the relation between society and nature, which is underlined by the protagonist constant fascination about Central Park.

I would like to explain the headline of the essay and partly the role of Central Park by the quote from Andy Warhol on page 9, lines 140-144: “Later in my life I heard Andy Warhol say that it was better to live in the city than the country because in the city he could find a little bit of country, but in the country there was no little bit of city. ” In the light of this quotation the headline of the essay is: “My Little Bit of Country”. There is no doubt that her little bit of country is represented by Central Park.

During the industrialization, the writers in Denmark wrote in a romantic style about the nature to make protest against the growing cities and the fading beauty of nature. I know this essay is written many years later, but it is interesting to get a new ankle on the theme, industrialization. The most likely explanation on why Susan Cheever is so enthusiastic about her life in New York, could be the fact that she is raised in the postwar period, which was a time characterized by a huge believe in the future in The United States. This has very likely affected her view upon New York in a very young age.

Marilyn Manson Vs The Pope

Fredrick Douglas Imagine yourself at the mercy of another human being. You…

The Golden Marmoset Golden marmosets, or Leontopithecus chrysomelas, have a mane derived…